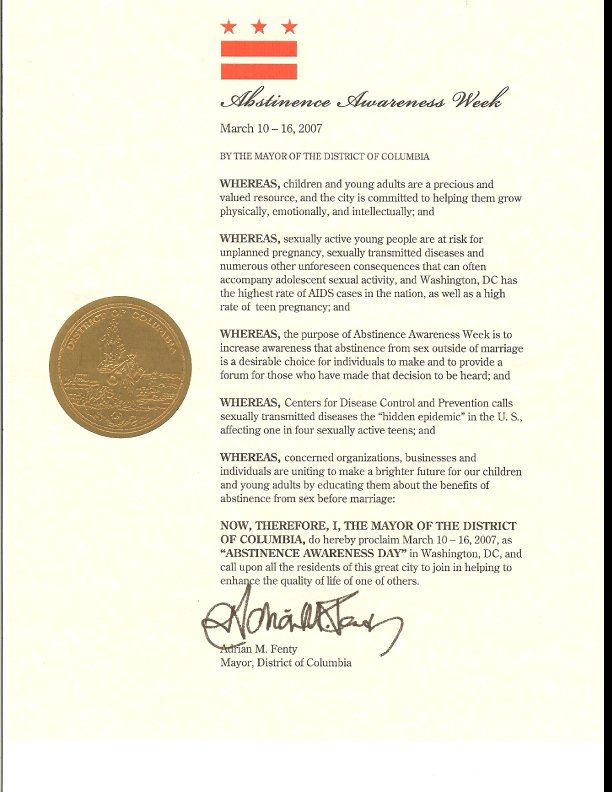 Lakia Merriweather said, “I’m too busy to baby sit. I don’t have time for it. This program helps me to keep my head straight. It’s good.”

These are comments made by high school students from Eastern High School who have decided to abstain from sex until they’re married, or at least, they said, “Until we’re old enough to make responsible decisions in this matter.”

The members of Ultra Teen Choice have decided they will respect their bodies as the temple it is, as indicated in 1st Corinthians, 6:19 which says “Know ye not that your body is the temple of the Holy Ghost.”

A very special guest, Miss District of Columbia Rita Sinha, was among this elite group. She speaks around the country, telling her story of how she has lived a life of abstinence. And she’s only 24-years-old!

“I’m saving myself for my husband. In fact, I decided as a young girl to become celibate,” Sinha said.

“There is so much emotion that comes along with sex, and I plan to go to law school this fall. Many of my friends have allowed some guy or girl to get inside their heads, but I believe that when you wait, you will meet who is destined to be your spouse.”

Milton Meza, another member of this group said, “There’re not enough people out here with good advice, and there’s lots of peer pressure. I don’t want to have babies early and have to work two jobs when I can barely support myself. I don’t want my Mom to support my child. I want to take responsibility.”

Nicole Jefferson, another member, said“I’m around others like me who have also chosen a celibate lifestyle, so I don’t feel any different. I’m not ready for the responsibility required for kids, and I don’t want kids to stop me from my goals.”

Richard and Stacey Urban, founders of “Ultra Teen Choice,” have as their slogan, “Character, not condoms.”  During the recent presentation held at the Urban’s home, astounding statistics were given about the District of Columbia on the latest status of HIV/AIDS.

Richard Urban reminded everyone that it takes seven years before symptoms of HIV appear. His statistics further showed that 50 percent of the students in the District of Columbia have contracted sexually transmitted diseases, with chlamydia at the top of the list.

There was some good news.

“There has been a 16 percent decrease in teen sex in the United States over the past two years, and 54 percent of U.S. teens are not having sex,” Richard Urban said.

Richard Urban quoted the following statistics:  35 percent of teen girls become pregnant at least once and 66 percent of sexually active teens regretted having sex and wished they had waited.

Wouldn’t it be great if the majority of students in high schools throughout the District of Columbia were members of such a group as Ultra Teen Choice or other such groups that teach abstinence? Wouldn’t it be simply marvelous if this celibacy thing just kind of caught on?

It would be marvelous if girls were not having sex, having babies, or dropping out of school to care for babies when they don’t even know how to care for themselves yet.

A special thank you goes out to Mayor Adrian Fenty for proclaiming the week of March 10-17, as Abstinence Awareness Week. Let’s do it again!